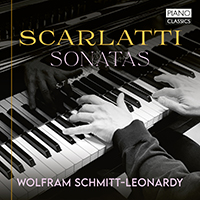 ‘An eagle whose wings are grown,’ according to his father Alessandro, the young Scarlatti left his native Naples for Venice, ‘escorted only by his own ability.’ By his early 20s he had already held audiences in thrall with an ability at the harpsichord which was deemed almost supernatural. There is assuredly the most prodigal imagination at work, as well as an extraordinarily sophisticated keyboard technique, in the 555 surviving keyboard sonatas which fuse Italianate cantabile and counterpoint with vivid Hispanic imagery: folksong, castanets, military trumpets and strumming guitars.
All these qualities can be enjoyed in Wolfram Schmitt-Leonardy’s selection of 17 sonatas. Several of them are taken from the collection of Kk1-30 (in the catalogue produced by Ralph Kirkpatrick) which comes down to us as the earliest source of the sonatas in print, published shortly before he moved to Lisbon, thence to Madrid and around the royal courts of Spain, in the service of the princess who would become the Queen of Spain. Her patronage afforded Scarlatti the time and resources to evolve a highly personal style, full of eccentricity and flights of fancy.

Hardly less than Bach, these sonatas have become for many pianists a proving ground for their own technique and imagination, rewarding an improvisatory response to their flamboyant effects. However, Schmitt-Leonardy also features several of the composer’s most poetic and reflective sonatas such as the ‘Aria’ Kk 29 and the melancholy soliloquy of Kk 208.

Wolfram Schmitt-Leonardy was born in Saarlouis, Germany, in 1967, and his first important teacher was a student of Walter Gieseking and Edwin Fischer. His quintessentially pianistic approach to Scarlatti exploits all the colouristic possibilities of a modern grand, while articulating the quick sonatas with sparkling deftness of touch.

Born in Italy in 1685, Domenico Scarlatti spent the majority of his career in the service of the Portuguese and Spanish royal families – with the latter appointment enabling him to devote his full attention towards composing for the harpsichord. This unusual cultural background accounts for why the Italian’s music, though contemporary with that of Bach and Handel, differs so much in comparison; Spanish dance rhythms (such as the flamenco), and folk tunes with Moorish and gypsy-like flavours, indicate that day-by-day-street life was a great source of inspiration to Scarlatti. Scarlatti died in 1735 in Madrid.
Written in single-movement form, Scarlatti’s sonatas reveal the development of new playing techniques, including note repetitions and fast passages in parallel 3rds and 6ths, as well as the innovation of musical structures, which point to the emerging Classical style.
This new recording presents some famous and lesser-known sonatas by Scarlatti, a careful selection presenting the many faces of his genius: from careless gaiety and stormy energy to intense lyricism and wistful melancholy.
German pianist Wolfram Schmitt-Leonardy is one of the leading pianists of his generation. His concert activities and CD recordings mark him as an extremely intelligent musician with the heart in the right place, his immense technical powers almost being taken for granted. His CD’s of Brahms, Schumann and Rachmaninoff have won him 5 star reviews all over the world: “astonishing and exquisite listening” (Fono Forum), “Electrifying passion and clarity” (Piano News), “dazzling brilliance and interpretative sophistication”(American Record Guide), “Coup de Coeur”(Piano Magazine), “In his recording of Chopin’s 24 Preludes, Wolfram Schmitt-Leonardy achieves a fusion of impassioned ardor and classical textual rigor..a stimulating and compelling listening journey, 9/9” (Jed Distler on Classicstoday.com).
More Less