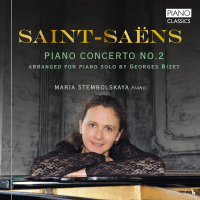 A unique coupling of Romantic-era transcriptions, and a fine showcase for the artistry of an Azeri pianist with a limpid touch and powerful intelligence at the keyboard.
In the centenary of his death in 1921, Camille Saint-Saëns is still patronised in some quarters as a prodigiously fluent musician of second-rate gifts. Yet his elders, his contemporaries and his students all esteemed him as an innovator as well as a gifted melodist and supremely disciplined technician in the craft as well as the art of composing. For Berlioz, the only problem with the child prodigy Saint-Saëns was that he knew too much. Ravel declared that he learnt everything he knew about orchestration from scores such as the Second Piano Concerto.
Out of the composer’s five piano concertos, the Second has long established itself as the most popular thanks to a unique and winning stylistic progression neatly summed up ‘from Bach to Offenbach’, opening with a monumental cadenza and orchestral response in the manner of a Bachian prelude for organ, and winding up with an exhilarating tarantella.
Three years after its composition in 1868, a version for solo piano was made by none other than Georges Bizet, Saint-Saëns’s short-lived contemporary. The arrangement was enthusiastically taken up by the composer, and it sheds valuable light on the essentially pianistic nature of his inspiration (after all, Saint-Saëns could play all of Beethoven’s sonatas from memory by the age of nine).
This rarely encountered but fascinating transcription is complemented by ‘Mon coeur s'ouvre à ta voix’, the love-confession sung by Delila in the grand Biblical epic staging the downfall of Samson, in a solo piano version made by the Russian musicologist Boris Borodin. Another of the composer’s greatest admirers was Tchaikovsky, and Maria Stembolskaya adds a pair of piano fantasies inspired by the best-known of his stage works, Eugene Onegin: a free transcription of the third-act Polonaise made by Liszt, and a spectacular paraphrase of the opera’s main themes by one of his most talented students, Paul Pabst.
Maria Stembolskaya's playing lends these transcriptions a scale and magnificence worthy of their originals. The intensity of her performances and the variety of her colouristic inflection evokes a powerful sense of the piano as an orchestra in its own right.

- Saint-Saëns' Piano Concerto No.2 in G minor Op.22, written in 1868, is distinguished by a variety of styles. The contrast between the classically constructed first movement and the finale, reminiscent of a tarantella, prompted an interesting observation, "He starts as Bach, and ends as Offenbach." In 1871, Georges Bizet, famous French composer (notably of the opera "Carmen"), created an arrangement for piano solo of this work at the request of the famous publishing house Durand. The result is an exuberant display of keyboard virtuosity and brilliance, brimming with French esprit and joie de vivre.
- The other works on this new recording are the Aria of Dalila “Mon Coeur s’ouvre à ta voix” arranged for piano solo by Boris Borodin, Tchaikovsky’s Polonaise from Eugene Onegin arranged for piano solo by Paul Pabst and Liszt’s Tchaikovsky Polonaise from Eugene Onegin.
- Born in Baku, Maria Stembolskaya started piano studies with her mother Natalia Zakharova at the Central Music School in Baku (Azerbaijan). She then studied in Moscow at the Academic College of Music with Galina Eguiazarova, and subsequently at the Tchaikovsky Conservatory under the direction of Prof. Elena Kuznetsova. From 1985 onwards, she has been awarded various national and international prizes, particularly First Prize at the "Pozzoli" international piano competition in 1993, the Samson François prize in 1998 and she won the "Busoni" international piano competition in 2003.
More Less