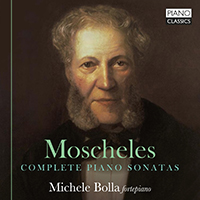 By 1814, when the publisher Artaria commissioned him to prepare a piano reduction of Beethoven’s Fidelio, Ignaz Moscheles was one of Vienna’s most popular pianists, and his career as a virtuoso had begun. A decade later he settled in London, having put the finishing touches on the teenage Mendelssohn’s formal instruction in Berlin the previous year; the two remained friends until the younger man’s death in 1847.

Moscheles’ composition has generally been viewed as a natural, not especially inspired adjunct to his considerable accomplishments as a performer and then teacher.

However, Schumann considered Moscheles one of the best sonata composers of his generation, and this valuable new recording gives proofpositive of Schumann’s claim. They were all written within the relatively condensed span of around three years: the Op.22 Sonata dates from 1814, while the single-movement ‘Sonate mélancolique’ Op.49 in the pathos-laden key of F sharp minor was written the same year but only published in 1821. Also composed in Vienna in 1814, the three movements of the Op.27 Sonata caracteristique centre around a Viennese popular song, Freut euch des Lebens, later immortalised in a waltz by Johann Strauss (and then quoted by Mahler in his Ninth Symphony).

Cast on the grandest scale in four movements, the Grande Sonate, Op.41 in E major, written in 1816, pays homage through its greater expressive and dramatic concentration to its dedicatee Beethoven. in Moscheles was capable of skilfully wrought musical structures, in which a Classical balance of thematic ideas is tempered with an early Romantic dynamism. Pathos in general, and chromaticism in particular, are not overplayed, and his music is never sentimental.

The winner of several piano competitions in his native Italy, Michele Bolla specialises in music of the Classical and early-Romantic period, working on both historical and modern instruments.

Ignaz Moscheles (1794-1870) was born in Prague. In 1808 he settled in Vienna where he was a pupil of Albrechtsberger and Salieri - thanks to whose commendations he became adjunct Kapellmeister to the Court Theatre from 1811 to 1813. Beethoven was so impressed by him that he entrusted him with the piano transcription of Fidelio. The approval of the genius of Bonn and the establishment of a friendship between them that would continue over time were pivotal in those years to launching the young musician into the stream of the international concert world.
The four piano sonatas of Ignaz Moscheles were composed and published in Vienna between 1814 and 1821. They belong to the composer’s first creative phase, nevertheless the compositional creativity that emerges reveals an already considered mastery of technique and the rich thematic invention. “He has Clementi’s science, Cramer’s expression and Kalkbrenner’s brilliance”, this description by a contemporary journalist sums up his capacities and the originality and power of both his playing and compositions.
Italian pianist Michele Bolla plays an 1815 Brodmann piano, perfectly suited to the repertoire.
More Less