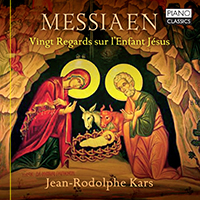 There have been many Messiaen pianists of note to perform and record his music during the last half-century, not least thanks to the composer’s generosity as a teacher of both the technical and spiritual aspects of his music, which go hand in hand as they do for very few others. Save for Messiaen’s second wife Yvonne Loriod, however, none of those pianists can claim so direct and profound an understanding of the composer and his music as Jean-Rodolphe Kars. This makes the present issue of a hitherto unreleased recording of the Vingt Regards all the more significant: essential listening for all Messiaen devotees.

The recording was made live by Dutch radio at a concert in the Kleine Zaal of the Amsterdam Concertgebouw on 30 April 1976. By then, Kars had pursued a concert career of note for almost a decade, having been a finalist in the 1966 Leeds International Piano Competition and taken first prize in the 1968 Olivier Messiaen competition.