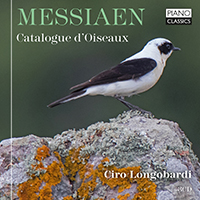 From an Alpine crow circling rocks and precipices to a lonely curlew off the coast of Brittany; from a golden oriole singing in the sun to a tawny owl hooting in a dark forest… The Catalogue d’Oiseaux of Olivier Messiaen forms an extraordinary and varied tribute to the landscape and bird-life of France, and to its composer’s powers of invention as he explored and developed innovations in harmony, melody and rhythm at a time when all the elements of music were in flux and up for grabs. Any new recording of one of the 20th-century’s major piano cycles is a major event.

The 13 compositions of the Catalogue are very different to each other, in length, form and intent. L’alouette lulu is a kind of antiphonal poem. La chouette hulotte boldly maps out territory for experimentation – a rhythmic study at the start, by the end a study in timbre. Le chocard des alpes and Le buse variable are mostly articulated by shouts, where we are close to noise; the French landscape is very present and raw. The material is often raw and dissonant, but Messiaen often uses what are traditionally blocks of dissonance to create consonance. There are pieces full of melody – Le loriot or La bouscarle – and songs rich in timbre but not saturated with colour like La merle de roche.

The Catalogue begins and ends with movements that are severe in nature and forbidding in mood. He liked to convey the impression that he composed music in isolation from the world around him, inspired first and foremost by God and by the birds whom he called God’s musicians.

But the period of the 1950s which saw the composition of the Catalogue was one of intense turbulence and tragedy for him, and it inevitably marked his music.

The Italian pianist Ciro Longobardi has made a specialty of 20th and 21st-century music. He won a major piano prize at the crucible of European modernism in music, Darmstadt – only the second Italian pianist to do so – and he has given Italian premieres of significant works by the likes of Ives, Kurtág and Xenakis. With both an assured technique and a sympathetic grasp of the idioms of the great music of our own time, he is well placed to make an outstanding contribution to the rich history of the Catalogue d’Oiseaux on record.

French composer Olivier Messiaen (1908-1992) was fascinated by birds and birdsong. On special expeditions he collected and notated the songs of birds in their natural habitat. Between 1956 and 1958 he incorporated his material in his cycle Catalogue d’Oiseaux, 13 pieces for piano solo. Each piece is written in honor of a French province. It bears the title of the bird-type of the region, and depicts the complete surroundings of the bird in question, the general atmosphere, the colours, the sounds, the temperature and the perfumes. Each piece is thus an evocation of the bird in its habitat.
Messiaen’s piano writing is highly original, not only in the imitation of the bird song but also in creating the atmospheres and the interaction between the two. In this sense the music transcends the picturesque and becomes a true work of art. Initially the extreme pianistic demands could only be met by Messiaen’s wife, pianist Yvonne Loriod, first performer and also dedicatee of the work.
Italian pianist Ciro Longobardi is a specialist in 20th century music, winner of the Gaudeamus Competition, and frequent guest at Contemporary Music Festivals.
More Less