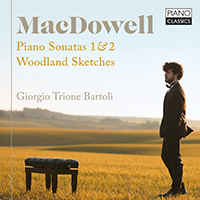 Edward MacDowell (1860-1908) spent formative years in France and Germany, impressed Liszt and others with his talents as a pianist and composer, and became a respected teacher and composer on his return to the US, dying before he reached 50 after sustaining injuries in a traffic accident and treating the ensuing depression with potassium bromide.

As a composer, MacDowell’s most enduring legacy lies in small-scale piano sets such as the Woodland Sketches first published in 1896, where subtle manipulations of harmony, melodic contour and texture take on evocative meaning. MacDowell alternates between dramatic and humourous moods with a Schumann-like rapidity of thought.

MacDowell’s four piano sonatas break out of the character-piece mould into epic musical statement, as indicated by their titles: ‘Tragic’ and ‘Heroic’ for the first two. On the one hand, these sonatas are large-scale, impassioned works, steeped in the late Romantic virtuoso tradition; yet at the same time, their projection of stern nobility gives them a curious emotional detachment that mixes uneasily with their expansive idiom.

Even in the tremendous First, a homage to MacDowell’s former teacher Joachim Raff, the sorrow is represented rather than expressed. There are few works of the period that are simultaneously so tumultuous and so remote. MacDowell expressed his aesthetic philosophy in words as lofty as his music, which he called ‘a kind of soul-language’. He intended each movement of the “Eroica” to evoke a part of the Arthurian legend, including a spirited scherzo to match the Doré illustration in which the knight of the Round Table is surrounded by elves.

Born in 1996, Giorgio Trione Bartoli won many piano competitions in his native Italy before making his career as a performer specialising in Liszt and the central-Romantic repertoire, and as a professor of piano presently based at the conservatoire in Foggia. This release marks his debut on Piano Classics.

A multiplicity of cultural influences makes the figure of Edward MacDowell (1860-1908), an American pianist-composer trained for a long time in Europe, particularly original. Born in New York, he received his first lessons from Colombian, Cuban and Venezuelan musicians, including the famous pianist Teresa Carreño. At the age of seventeen, MacDowell continued his studies at the Paris Conservatory, in Antoine Marmontel's class, and then at the Frankfurt Hochschule, where he studied composition with Joachim Raff. He was listened to by Clara Schumann and Franz Liszt, and was introduced by the latter to the publisher Breitkopf & Härtel in Leipzig. In 1888 he returned to the United Sates where he settled in Boston, combining his work as a composer with that of a concert pianist. When he moved to New York in 1896, he also taught at Columbia University, where MacDowell was the first to create a music department. In the same year, 1896, the MacDowells bought a farm in New Hampshire, an ideal place to pursue musical creativity in a peaceful rural setting. Much of MacDowell's compositional output dates from this happy period, including two piano concertos, two orchestral suites, four symphonic poems, several piano suites, Songs, four piano sonatas and numerous piano transcriptions of 18th-century music.
Macdowell’s sources of inspiration are to be found in German romanticism, both poetic (Goethe, Heine) and musical (Mendelssohn, Schumann and Brahms), combined with a predilection for Nordic sagas, establishing a Celtic Revival (MacDowell's had Irish and Scottish origins). The Woodland Sketches show the composer at his best: charming, enchanting, elegiac and nostalgic character pieces, reminiscent of Grieg and Schumann.
Giorgio Trione Bartoli (born 1996) graduated with honors at the "Santa Cecilia" National Academy in Rome with Maestro Benedetto Lupo. He is prize winner of many piano competitions, o.a. the Premio Venezia.
More Less