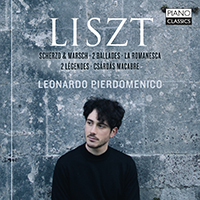 Leonardo Pierdomenico was a finalist at the Van Cliburn International Competition held in May 2017 in Fort Worth, Texas. Six months later he made this, his debut studio album, which is sure to be listened to eagerly by pianophiles across the world. Pierdomenico played the Second Concerto of Liszt in the Van Cliburn competition final, and his performance won him the Raymond E. Buck Jury Discretionary Award; his semifinal performance of Chopin’s First Ballade was included on the internationally released CD of highlights from the competition.

At 24 years of age, Pierdomenico has also been a first-prize winner at the 2011 Premio Venezia Piano Competition held in La Fenice in Venice, and a semifinalist at the 2016 Queen Elisabeth International Piano Competition. Born in Pescara, he has performed across Italy having graduated from his local conservatoire, as well as giving recitals in major venues in Berlin and Brussels.

Liszt is a natural choice for his debut recital. However, Pierdomenico has largely chosen the path less well trodden in his selection from Liszt’s vast oeuvre. He has concentrated on the brooding, melancholic and introverted sides of the composer’s multifaceted personality. The Csárdás macabre is one of Liszt’s most radical conceptions, with sequences that push at the boundaries of tonality. The two are Légendes based on the miracles of two of the composer’s namesake Saints, St. Francis of Assisi, who allegedly preached a sermon to an attentive flock of birds, and St. Francisof Paola who, legend has it, crossed the Strait of Messina fashioning a vessel from his cloak and staff after a ferryman refused him passage. As well as the justly ubiquitous Second Ballade, Pierdomenico gives a rare outing to the ‘crusader’s song’ of the First; another rarity is the single-movement Scherzo und Marsch which finds the composer in heroic vein, replete with demanding fugato sections and rapier-like arpeggios.

This new recording is further distinguished by booklet notes on the individual pieces by a slightly older Liszt pianist of distinction, Mark Viner, who has also made several critically acclaimed recordings for the Piano Classics label.

Young Italian pianist Leonardo Pierdomenico drew the international spotlights on him winning the Jury Award at the recent Van Cliburn Competition. Having already won the prestigious Premio Venezia in Italy he steadily builds his career, playing recitals and with prominent orchestras.
His debut CD on Piano Classics features an impressive selection of piano works by Franz Liszt: the demonic and fiendishly difficult Scherzo und Marsch (still rarely played), the two dramatic Ballades, the two famous Légendes with their religious references, and a late work, the Csárdás Macabre, an astonishing and spine-tingling work featuring a remorseless sequence of parallel fifths.
The booklet contains excellent liner notes written by the Chairman of the English Liszt Society: Mark Viner.
More Less