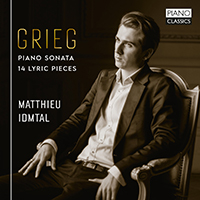 Having completed his studies at the Brussels conservatoire and won first prizes at several distinguished competitions for young musicians, Matthieu Idmtal quickly became known as a specialist in the music of Alexander Scriabin. His debut on record was dedicated to a sequence of the Russian composer’s Etudes and Preludes, and it won him golden reviews: ‘I have listened to Sofronitsky, Gilels, Richter and Ashkenazy – great Scriabin players all. Young Matthieu Idmtal has the potential to join that lofty group.’ (American Record Guide)

His Scriabin disc was followed by an equally well-received album of the violin sonatas by Edvard Grieg, in company with his regular violin-recital partner Maya Levy. The natural sequel is this focus on the Norwegian composer’s solo output. Grieg composed seven books of Lyric Pieces across the course of his career: songs without words that amount to a diary of his compositional evolution as well as testament to enduring preoccupations such as the artistic transformation of folksong and the evocation of natural phenomena such as sunlight and the movement of water. Idmtal’s sequence ranges across all seven books, and does not shy away from established classics such as the Arietta and Wedding Day at Troldhaugen. However, he also includes several lesser-known and introspective masterpieces such as the Vanished Days and Homesickness from the Opus 57 set.

Even by their side, however, the Piano Sonata Op 7 is an almost forgotten masterpiece. Grieg wrote it at the age of 22, recently graduated from the conservatoire in Leipzig, yet even within the first movement’s opening exposition there are shapes and harmonies that instantly identify the composer’s artistic fingerprint. The sonata reflects the ambitions and character of the young Grieg: high-spirited, virtuosic, impetuous, and permeated with brusque mood swings. Cast in a compressed version of the traditional four- movement form, it encompasses many changes of mood, sometimes very abrupt, as if the composer was overflowing with musical ideas and inspiration. It makes an ideal introduction to the familiar world of the Lyric Pieces as well as a notable debut for Matthieu Idmtal on Piano Classics.

Edvard Grieg (1843-1907) was at the forefront of a flourishing of creativity that took place in Scandinavian culture in the late 19th and early 20th centuries, alongside his contemporaries, Nielsen and Sibelius. His imagination was particularly fired by the folk music and stories of his native Norway. His catchy tunes, lively rhythms and haunting musical evocations of the majestic Norwegian landscapes have made Grieg immensely popular with a wide audience.
This new recording presents Grieg’s substantial Piano Sonata Op.7 and a selection of his famous Lyric Pieces (Lyrische Stücke). The Piano Sonata contains all the elements so characteristic of Grieg's genius: long lyrical melody lines, passionate drama, intimate moments of respite, nimble dance rhythms, and grandiose outbursts. It fully reflects the ambitions and character of the then still young composer: high-spirited, virtuosic, impetuous, and permeated with brusque mood swings.
"The ten volumes of Lyric Pieces form an intimate slice of my life," Grieg wrote in a letter to his publisher in 1901. Published between 1867 and 1901, the volumes can almost be read as a personal diary. The cycle contains 66 pieces and clearly follows the line of Grieg's examples Mendelssohn, Schumann and Chopin. Yet even here the composer's own personal mark is unmistakably present: the compositions often feel traditionally romantic, but at the same time the typically Norwegian melodies and folk dance rhythms are undeniably present.
As a prize winner of more than 15 international competitions, Matthieu Idmtal has firmly established himself as a distinctive musical personality, having been praised for his highly sensitive interpretations. Hi Scriabin recording met with enthusiastic critical acclaim: “I have listened to Sofronitsky, Gilels, Richter and Ashkenazy – great Scriabin players all. Young Matthieu Idmtal has the potential to join that lofty group.” – The American Record Guide.
His affinity with the music of Chopin made him create the ‘Brussels Chopin Days’: an international concert series dedicated to Frédéric Chopin, of which he is the artistic director since 2013.
More Less