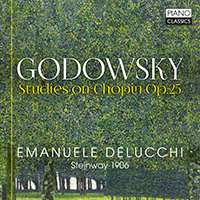 Some of the most challenging keyboard music ever composed in a new recording of consummate artistry.

Born in 1987, Emanuele Delucchi has gained renown both in his native Italy and farther afield for his cool-headed mastery of the ‘hyper-virtuoso’ composers after Liszt who pushed the boundaries of keyboard technique to its farthest limits. He is among the foremost modern exponents of Charles-Valentin Alkan, and this is his third album for Piano Classics celebrating both the original works and transcriptions made by Leopold Godowsky.

‘For an entrée into the polyphonic world of Godowsky, Emanuele Delucchi’s programme could hardly be bettered,’ said Gramophone of Delucchi’s programme of the Passacaglia, original Poems and a selection of transcriptions (PCL0096). The performances are distinguished by ‘great technical accomplishment and a relaxed, assured empathy’: a verdict echoed by Classics Today in reviewing Delucchi’s 2017 album of the elaborations and transformations wrought by Godowsky on Chopin’s Etudes Op.10: ‘every inch a viable contender alongside the Marc-André Hamelin and Carlo Grante reference versions… Delucchi’s total comfort with and absorption of Godowsky’s serpentine idiom makes itself felt in every measure. Needless to say, I look forward to Delucchi’s performances of the remaining studies.’

As an introduction to the works on this disc we quote Godowsky himself: “the studies’ aim is to develop the mechanical, technical and musical possibilities of piano playing, to expand the peculiarly adapted nature of the instrument to polyphonic, polyrhythmic and polydynamic work and to widen the range of its possibilities in tone colouring”.
Leopold Godowsky (1870-1938), one of the greatest pianists in history, was fascinated by Chopin’s Etudes, and made his own enhanced transcriptions of them, to be divided in three types: a strict transcription for the left hand alone, free transcriptions, in which the text is either inverted, combined with another study or imitated through the medium of another study, and Cantus Firmus, where the left hand plays the melody and the right hand is freely treated in a contrapuntal way. The present recording features Godowsky’s studies on the Etudes Op. 25 and the “3 Nouvelles Études, op. posth”.
Young Italian pianist Emanuele Delucchi has the rare ability to conquer the immense difficulties of these works and still make music of them. The two earlier Godowsky recordings by Emanuele Delucchi received rave reviews: : “Its palette of warm colours remained intact but gained a more incisive attack, allowing Delucchi’s voicing and extraordinary digital facility to be heard at its best…Delucchi is in a class of his own”, Jed Distler of Classicstoday.com wrote: “9/9: every inch a viable contender to the reference versions”.
More Less