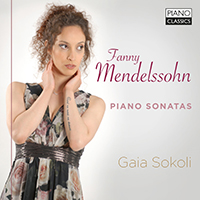 The first album to bring together all of Fanny Mendelssohn’s four piano sonatas, written over the course of almost 20 years, and including the ‘Easter Sonata’ rediscovered in 2010.
Born in 1998 to Albanian parents, the Italian pianist Gaia Sokoli has won rave reviews as well as a string of competition awards in her home country. She took first prize in the Bradshaw and Buono Competition held annually in New York, and made a Carnegie Hall debut at the age of 13. Gaia Sokoli was giving concerts as a young child: ‘Making music came naturally to me and I felt I had to do it.’

Gaia Sokoli’s repertoire ranges from Bach to Ligeti, but she has a particularly strong feeling for the late-Classical and early-Romantic piano composers from Beethoven to Chopin and Schumann. She studies with Roberto Prosseda, who has contributed the booklet essay to her debut recording, discussing Fanny Mendelssohn’s sonata writing in the context of a culture which saw her compositional activity as little more than the talented exercise of a hobby when set alongside her brother Felix’s pre-eminent genius.

Gaia Sokoli is well placed to bring out all the ardour and pianistic sophistication of Fanny Hensel’s piano writing, which in its smaller and lighter forms – the songs without words and nocturnes so beloved of salon audiences – has received plenty of attention on record before now. But Hensel was no less accomplished at disciplining her melodic imagination on the grander scale of the sonata. Two years a standalone sonata movement composed at the age of 17, she wrote a three-movement work in the Romantically resonant key of C minor, with an insistent rhythmic tag in the finale which her brother ‘borrowed’ for a Vivace movement of his own two years later.

From six years later, the year before her marriage to Wilhelm Hensel which drastically curtailed her creative output, comes the ‘Easter Sonata’ so excitingly rediscovered in modern times. The name derives from the Easter Monday when she completed the sonata’s first movement, but the four movements generate a sense of momentous drama through to a tormented A minor finale in which an Easter chorale finally bestows serenity.

After this powerfully original work, the G minor Sonata of 1843 raises the dramatic stakes still further with a headstrong opening movement worthy of any piano work by more celebrated male contemporaries. Unstable harmonies as well as Fanny’s trademark melodic charm propel the sonata forwards towards a surprisingly carefree finale.

· The figure of Fanny Mendelssohn (1805-1847) is still awaiting an adequate revaluation. The elder sister of Felix Mendelssohn, four years younger than her, Fanny was born in Hamburg in 1805 into a very wealthy family. Their father Abraham was a banker and took particular care in the education of his children, who had the privilege of a very high profile cultural (not just musical) education in Berlin, where the family moved in 1812. Fanny and Felix studied composition with Karl Zelter, who gave them an excellent foundation in contrapuntal technique, and piano with Ludwig Berger, a pupil of Hummel. Fanny was also a piano virtuoso and often performed in Sunday domestic concerts in their Berlin home, also in duo with her brother Felix. Only in 1845 did Fanny decide to publish her first composition under her own name, since she had always been discouraged (not to say opposed) in her public activity as a composer, by her brother and the rest of her family. So her father wrote to her in a letter dated July 16, 1820: “Music will perhaps become his [Felix's] profession, while for you it can and must be only an ornament”.
· This new recording presents the three Piano Sonatas. The early compositions are compatible with the generic definition of "Mendelssohnian", as they present stylistic elements common to Felix's language, but Fanny's language, with the progressive liberation from her family of origin, gradually conquers an originality that takes on the most convincing tones precisely in the Sonata in G minor.
· Played with conviction, feeling and brilliance by the young Italian pianist Gaia Sokoli. The excellent booklet notes are written by her teacher, Roberto Prosseda, one of the foremost pianists of Italy and Mendelssohn specialist.
· An important recording and tribute to a long underrated, female composer!
More Less