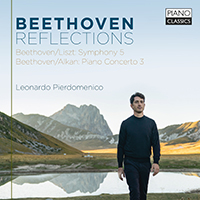 The heroic voice of the greatest pianist/composer of all, recast by two of his most virtuosic successors.
As the probably apocryphal recipient of a kiss from the ailing and elderly Beethoven, Franz Liszt was celebrated by his contemporaries as ‘the’ successor, the keeper of the flame, no less than several other composers equally deserving of that accolade from Schubert and Schumann to Brahms and Wagner. The connection between Liszt and Beethoven, however, is particularly strong in the medium of the piano, through which they spoke to the audiences of their time with a voice of untrammelled authority and vigour.
Liszt’s project to transcribe the nine symphonies of Beethoven occupied him, on and off, for almost three decades. His aim was not merely to compress all the crucial instrumental voices within the compass of a single keyboard and ten fingers. More ambitiously, his transcriptions strive to ‘grasp the spirit of the work as well as the letter’, as he indicated in a preface to the collection. The Liszt/Beethoven Fifth is certainly no less bold, striking or relentless a path-breaking piece than the original, perhaps especially suited to the piano medium by virtue of its first movement’s defining and intrinsically percussive nature, which has attracted interpreters of the calibre of Glenn Gould and Paul Badura-Skoda.
Now the marvellously gifted Leonardo Pierdomenico joins their ranks, with a critically acclaimed Piano Classics debut of.’ little-known Liszt already under his belt: ‘a stunning debut’ according to Gramophone. ‘Would that half the seasoned Lisztians I know had Pierdomenico’s keen ear for stylistic differentiation within this half-century of repertory. His highly developed technique and cultivated sound, both adaptable to a variety of affects, are wedded to those twin essentials for artistic Liszt-playing: imagination combined with thoroughgoing, scrupulous musicality.

These gifts are equally suited to a less familiar example of Beethoven transcription from the golden age of the keyboard lion: Charles-Valentin Alkan’s version of the Third Piano Concerto’s first movement in which Beethoven’s work is ‘reduced’ to the scale of Alkan’s own keyboard-only Concerto. But listening to the result, a reduction is hardly the term, for Alkan’s imagination and insight brings the tense dialogue, the battle and fray of Beethoven’s other titanic C minor orchestral work into focus with no loss of impact on the listener, capped with a breathtakingly complex cadenza which quotes the finale of the Fifth Symphony at its climax.

This original concept-CD presents three works by Beethoven as reflected in the eye and mind of another composer, and transmitted to another medium, the piano solo.
Franz Liszt transcribed Beethoven’s 9 symphonies for piano solo, a colossal enterprise of far-reaching importance: not only he made this music thus accessable for a wide audience who could not hear the symphonic works otherwise, but he also created a new work of art in itself. The iconic 5th Symphony recorded here retains all of its demonic power and intensity, the near-impossible piano writing adding to a sense of high-strung tension and drama.
Charles-Valentin Alkan was one of the greatest pianists and piano-composers of the 19th century. Apart from his substantial output of original piano works (and hów original they are!) he made a transcription of the first movement of Beethoven’s 3rd Piano Concerto, integrating the by no means easy piano solo part in the orchestral structure. A special feat is Alkan’s own cadenza, a lengthy and insane outpouring of Beethovenian frenzy, even quoting the triumphant theme from the finale of Beethoven’s 5th symphony!
As a bonus we hear Beethoven’s “An die ferne Geliebte” in a transcription of Franz Liszt.
This second recording for Piano Classics by young Italian pianist Leonardo Pierdomenico firmly establishes his position as one of the most promising artists of his generation. His first CD with works by Franz Liszt received rave reviews from the international press, among which the prestigious Gramaphone Critic’s Choice: “His highly developed technique and cultivated sound, both adaptable to a variety of affects, are wedded to those twin essentials for artistic Liszt-playing: imagination combined with thoroughgoing, scrupulous musicality.”.
More Less