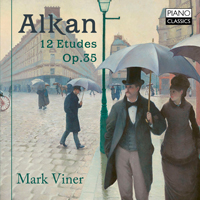 A new recording of Alkan on Piano Classics, another milestone in Piano Classics’ crusade for the rehabilitation and recognition of Charles‐Valentin Alkan as one of the most original romantic composers of the 19th century. The 12 Studies in all the Major Keys follow the key sequence of ascending fourths. The studies each tackle a certain technical feature (such as octaves, repeated notes, tremolos etc) but transcend the exercise level in their structure of a free fantasy or symphonic poem. Some have titles, like “Chant d’amour‐Chant de mort”, “L’incendie au village voisin”, while the famous F major study, a savage and exhilarating study in parallel octaves (mostly on the white keys) is called “Allegro barbaro”. Mark Viner is recognized as one of the most exciting British pianists of his generation, and is becoming increasingly well‐known for his bold championing of unfamiliar repertoire. His earlier recordings for Piano Classics include an excellent Liszt Transcriptions recital and a remarkable recording of Thalberg Operatic Fantasies, which was enthusiastically hailed by the press: “An exceptional disc from a blazing young British talent” (Gramophone). Mark Viner is chairman of the Alkan Society and has
a busy concert schedule, the coming season will see his Wigmore Hall debut.